Welcome to Famous in Your Field! Here’s your free weekly tip to boost your fame factor. (Be sure to sign up in the box on the right to get on the VIP list for free tips and training, delivered straight to your inbox.) 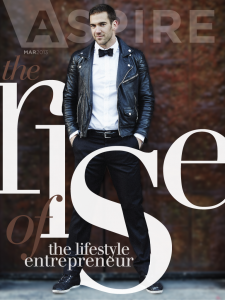 In 2008, Lewis Howes was an unemployed 25 year old, sleeping on his sister’s couch and eating her macaroni and cheese.

The timeframe from couch surfing to internet millionaire?

[Click the cover image to the read the article in ASPIRE magazine.]

Here’s a quick survey of the main properties in the Howes empire:

Lewis Howes’ hockey-stick trajectory from broke to multimillion-dollar business owner started in an unlikely place: LinkedIn, the social networking site for business professionals. During his six-month stint on his sister’s sofa, recovering from a career ending football injury, Lewis became one of the world’s foremost authorities on LinkedIn.

1. No fear of huge success or huge failure.

“I’m not worried about whether something might not work. I’ll try anything.”

Howes parlayed his sports training discipline to the business world, where he focused single-mindedly on achieving his goals, not whether his ideas might fail. This “all out” effort trumps half-hearted over-thinking any day.

“My biggest fear is being average. I want to go full speed ahead with everything I take on.”

Hustle played a big role in the speed and scale of Howes’ success. While other online marketers were producing a webinar a month, Howes gave four to seven free training webinars every week. At the end of each webinar, he’d offer his LinkedIn training course to the 500 to 1000 participants.

“I’ve applied everything I know about performance, discipline, and excellence in sports to building my businesses today.”

With early experiences like an introduction to internet marketing guru Joel Comm turning into a $6K+ webinar , Howes knows the right person can shorten your learning curve or create life-changing opportunities for you.

His approach: become friends with people before they make it big. Research them; find out their interests and connections. Offer them something for free. “The more you give to people, the more they’re willing to reciprocate.”

3. Inspiring and influencing people to take action toward their goals.

Videos of Howes as a football player show him challenging and cajoling team members, making them laugh and celebrating every success, no matter how minor.

He’s taking that energy, drive and joie de vive and building a massive following beyond the world of online marketing. He’s speaking at conferences and hosting meet ups across the country. A few months ago, Howes spoke at the White House, as one of the 2012 Empact100, spotlighting the top companies in the U.S. run by entrepreneurs age 30 and under.

What’s next for Lewis Howes? Don’t look for him to rest anytime soon. This just-turned 30 year old wants to be a household name.

“I’m trying to build a bigger platform for myself. More leverage, more influence so that I can serve more people.”

The platform is growing: Lewis is writing for Entrepreneur.com and Forbes.com, has almost 100,000 followers on Twitter and is working on a TV show (just not one focused on his love life.)

It keeps going. In 2013, he kicked off a podcast called The School of Greatness to share “inspiring stories from the most brilliant business minds, world class athletes and influential celebrities on the planet.”

“I want to succeed until my eyes bleed.”

This week, take a page from Lewis’ success manual. Find one activity in your business and turn up the volume. Scale it 10x and see what kind of results you get. Your cover story is just around the corner!

Enter your name and email and get on the VIP List...it's FREE!

You'll get: insider tips on how to break out of the commodity trap, create more buzz and become known as a leader and expert in your industry.
Your information will *never* be shared or sold to a 3rd party.