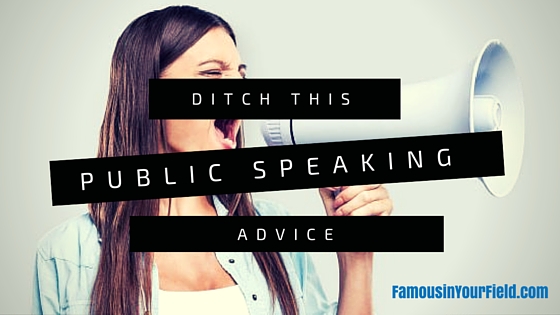 You’ve probably taken some kind of “Introduction to Delivering Presentations” course. (Maybe more than one!)

It might have been your high school speech teacher, or a well-meaning seminar leader who drilled public speaking commandments into your head.

But I’m here to tell you that some of the “conventional wisdom”; the stuff we all know about speaking to a group, is just plain wrong.

Myth #1 – Don’t move your hands while you’re talking, it’s distracting to your audience.

Who hasn’t read or been told that they should keep their hands still? It’s one of the oldest bits of advice that gets passed down, from wise teacher to eager pupil.

Sure, you don’t want to make repetitive, nervous tapping or coin jingling noises, but moving your hands – yes, frequently even – to emphasize points you’re making?

THAT builds an impact.

Vanessa Van Edwards is a body language expert who runs a human behavior lab. She talks about science, psychology and body language on her site, Science of People.

Vanessa’s team ran a study on the most popular TED talks. They found that even when two talks covered the same topic:

Moving your hands from side to side and up and down actually makes your talk more compelling.

Why? It gives the listener visual, as well as auditory content to keep the brain engaged.

The gist: You should speak quickly in order to capture your audience’s attention and keep them interested.

“Speaking quickly shows energy and excitement,” they say. “Don’t take too much time. You need to speak fast, otherwise your audience will be bored.”

Instead, use your voice to influence others.

UCLA acoustic scientist Rosario Signorello conducted charisma experiments. Here’s what she told the Wall Street Journal: “You have the capacity to shape your voice in a way that makes people perceive you as a leader.”

So, how can you become more charismatic while speaking? By speaking more s-l-o-w-l-y.

Think about the qualities of a nervous (sounding) person:

To broadcast confidence, slow down. Don’t rush to get the words out; pause a second or two between points for emphasis. Silence, used strategically, builds interest.

Speaking more slowly and pausing demonstrates that you’re confident in the importance of what you have to say and in your audience’s desire to hear it from you.

Myth 3. Focus on your words.

Here’s a bit of speaking advice you’ve heard over and over, “Script what you’re going to say. Plan it carefully! Using the right word or phrase is crucial.”

In fact, most people who have to give a presentation or a speech spend nearly all of their preparation time crafting the words.

They agonize over this phrase or that. Have they used a certain word too often? Is it the right word? Is there a better word? What if I flub the word?

The content that you deliver matters. There’s no doubt.

But the way that you deliver your content, the non-verbal matters so much more than you think.

What the researchers found was amazing. And counterintuitive.

Viewers who watched talks with sound and those who watched speakers on mute both rated the same talks highly.

Both the with-sound and the without-sound viewers rated same speakers as the most charismatic, intelligent and credible. (Yes, whether they heard the words or not!)

The lesson here is that anyone who has to deliver a message should spend at least as much time practicing delivering the content as what they’ll say.

Focus on the energy you want to bring and using it to connect with the audience.

“Anyone with a big idea should be able to express their passion both verbally and nonverbally,” advises Vanessa Van Edwards.

This week, pick one of these three speaking myths and practice doing the opposite.

If you normally keep your hands at your side while talking, bring them up to your waist and move them to emphasize your points.

Try slowing down your speech in a conversation. Use strategic pauses when leading a meeting.

Or, focus on your energy during a presentation, not a script.

The forecast for your week? 100% chance of awesome!

Enter your name and email and get on the VIP List...it's FREE!

You'll get: insider tips on how to break out of the commodity trap, create more buzz and become known as a leader and expert in your industry.
Your information will *never* be shared or sold to a 3rd party.